A Look Inside Our Forensics Science Class 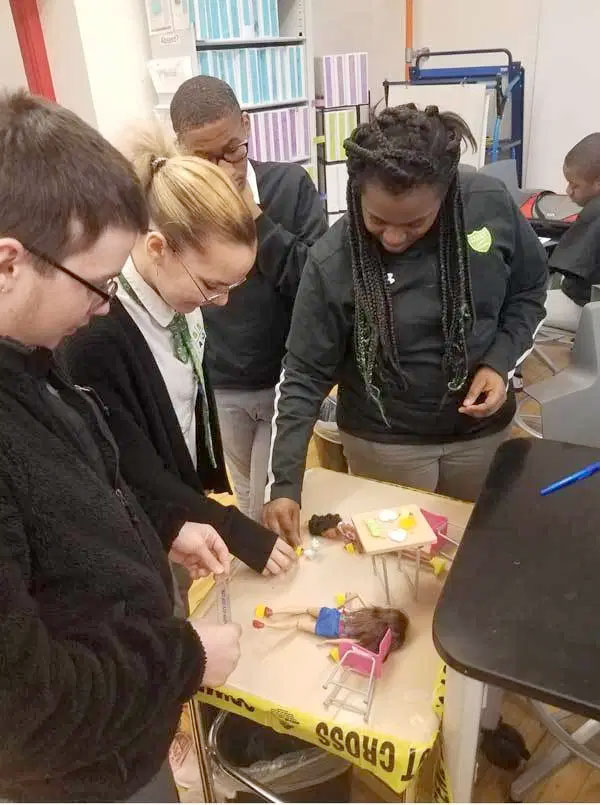 “I liked the creativity, interacting with team members, and acting as real investigators during the crime scene activity.  I learned ways of collecting evidence, how to identify and point out possible evidence, and differentiate futile evidence and useful ones.  I would recommend this class to those who are interested in forensics or just interested in general.”

“It allowed us to be creative with our investigative team and how the victim died.  Detectives go through a lot to find evidence and trace it back to a suspect.  I recommend this class because it will expand your interest in forensics.  If you are interested in forensics, it will teach you and can help you get further if you want to into that field of work.”

“I really like the fact that Ms. Reed made it look as real as possible with blood and bodies.  It made me feel like I was at a real crime scene.  I learned to search all the land, use all possible resources.  Later on in life, this could help when I need to find something.  I would recommend this class just for the fun of it.  It’s super easy and Ms. Reed is a very nice teacher.”

“I liked that it gave me a chance to understand and participate I what happens before, during, and after a crime is committed as well as investigating the scene.  I learned that the most insignificant things could completely change how someone can view the crime.  I also learned how to professionally collect evidence.  It will help me solve difficult problems by analyzing details and not just in Forensic Science but in all things.”

“Doing the mini crime scene, I’ve learned that detectives use many different tactics and strategies to examine a crime scene.  I liked that this was a fun and interesting activity.  The activity made me feel like I was a real detective trying to use evidence to determine what was the cause of death and who was involved.  This will help me in the future so I can be able to use evidence to make inferences.”

“I like doing the reports and forms for the crime scene.  I learned who to thoroughly investigate a crime scene. Later on this can help me if I want to pursue a career that deals with criminal justice and law.  I would recommend this class to anyone who wants to b a lawyer, policeman, detective, forensic scientist, etc.”

“I learned how to think logically and analyze situations in order to come up with a conclusion.  i liked how it made me think and feel like a real investigator.  I would recommend this class because it is interesting and really makes me think.  It also connects with real-world issues and this would be a great course for anyone interested in that career.  This will help me in the future by enabling me to solve crime scenes faster and it will help me to understand them.”

“I like that we are able to see a crime scene and are able to do investigative type work to solve the crime.  I learned how to conduct investigations by collecting evidence and how to store certain pieces of evidence.  It will

help me understand how to solve a crime scene, and be able to find out who committed the crime.  It gives you the opportunity to be yourself and think outside the box and be creative.”

“I like how the doll was set up and the tables and chair like it was an actual crime scene.  I learned how to find certain clues and investigate properly.  This class is interesting.”